From ThinManager Knowledge Base
(Redirected from Display Client)
Jump to: navigation, search

Note: The term MultiSession is used to describe a terminal that has been configured with two or more Display Clients. The user can switch between Display Clients using an on-screen menu or hot keys.

These options can be combined on the same Display Client. For example, a Display Client could use SmartSession to choose the server connection order, Instant Failover to maintain a backup, while using AppLink to limit the terminal to a single application. Additionally, a terminal server may be a member of several Terminal Services Display Clients. The Display Client List Wizard can be launched by either: 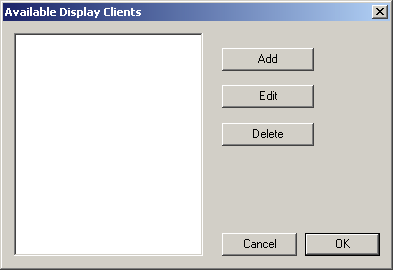 Each Terminal Services Display Client can use a single protocol to connect to the terminal servers. Select either the default Microsoft© Remote Desktop Protocol (RDP), the Citrix© ICA protocol, or the legacy Citrix Device Services.
Select Next to continue, Finish to save and close, or Cancel to close without saving.

This page sets the roles of the Display Client.

Select Next to continue, Finish to save and close, or Cancel to close without saving.

Note: Quotation marks may be needed when there is a space in the path.